What is an aircraft transponder?

Basic radar technology has been around since the 1930s when all we had was a blip on a screen with no other information. An aeronautical transponder (short for transmitter-responder) is the system on an aircraft that sends out the radio signals in response to radar interrogation. The responses from aircraft are picked up by your PiAware or FlightFeeder device. Transponder technology has evolved incrementally over time. ADS-B transponders have been available for over a decade and are becoming more common as air navigation service providers increasingly mandate their use. ADS-B transponders send a variety of information (e.g., latitude, longitude, altitude and speed) directly from the aircraft without the need for traditional radar.

Aircraft transponders have the ability to listen to an interrogation signal sent from a radar site and then to respond with information. The first transponders' reply signal, called Mode-A, would return a 4 digit identifier only (“squawk code”). This reply message was soon extended to Mode-C which added the altitude information. Later, the technology was extended again to Mode-S by adding a 24-bit unique ICAO identification number. The really big change came with "Mode S Extended Squitter" which added extra information sent from the aircraft, most notably position information. This mode is also known as Automatic Dependent Surveillance-Broadcast ("ADS-B").

ADS-B is quite different from other transponder modes. The main advantage is that the location information is broadcast without waiting for an interrogation signal. A plane in the sky will broadcast a position message about twice per second. Since the message includes position information, you can get a fairly complete surveillance of the airspace. 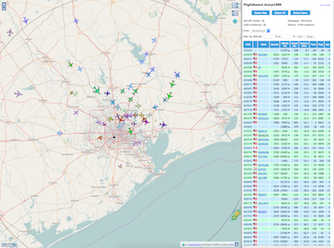 Your PiAware or FlightFeeder's "local data" view is an easy to use visualization of transponder data. Mode S, MLAT and ADS-B aircraft are color coded in the list. Mode S entries are aircraft for which your device does not currently have a position. MLAT entries show aircraft for which FlightAware was able to calculate and return a derived position (because FlightAware received the same signal from several receiver sites including yours). ADS-B entries show position information directly from the aircraft. To access your live local data, you must be connected to the same local network as your PiAware or FlightFeeder device. If you are, then you can access your local data by clicking the “view live data” link on your “My ADS-B” page at flightaware.com.

ICAO allocates blocks of codes to a country (PDF, see Appendix A) and then these are registered by the country to certain aircraft. This is how we can display the country flag icons for each aircraft in your local data view!

Coverage and Range: The Basics

Coaxial Cables with Your PiAware